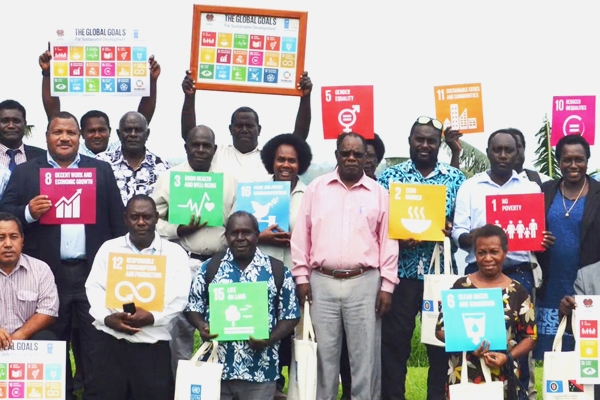 The Millennium Development Goals (MDGs), which preceded the Sustainable Development Goals (SDGs), were criticized for not having fully met the goals that were set for 2015. Amongst the motives for criticism was the inability to implement these objectives using a bottom-up approach, that is, starting from the local level.

The 2030 Agenda, via its proposed 17 SDGs, seeks to explore a new model for sustainable development which can manage to tackle problems that are seriously affecting, in a diffuse and growing manner, a large number of people. These problems, among others, include lack of employment, precarious employment, global warming and poverty.

Demographic tendencies, globalization, technological advances and the increase of inequality are factors that significantly affect the above-mentioned issues.

The 2030 Agenda puts emphasis, for the first time, on the need for promoting policies that simultaneously relate social, economic and environmental aspects to achieve inclusive and sustainable development.

To promote a new model of development, there is a need for new answers that, additionally, bring innovative potential. In the broad sense, innovation, as the available research affirms, is the crucial need for finding solutions to problems in today’s rapidly changing society.

Where do we start in order to build a new paradigm of production and consumption? Are there already production models that, in addition to innovating, are committed to communities and promote democratic processes, thereby helping to build active citizenship?

We must start with what we already have, and these models exist; they represent a significant and diffusive presence that continues to grow, despite not having the visibility[2] they deserve in the media. The available data and initiatives that are ever more frequent in the field of public policies[3] in countries like Costa Rica, Nicaragua, the Philippines, France, Italy, Spain, Canada, South Africa, South Korea, Uruguay and Cape Verde, among others, prove this.

We refer to organizations and enterprises of Social and Solidarity Economy (SSE) that promote relations based on reciprocity, solidarity and the distribution of benefits as a result of the production of goods and services, while prioritizing the creation and maintenance of decent jobs.

First, the organizations and enterprises of the SSE, if genuine, incorporate principles and values which make them especially suitable for a development that relates the social to the economic, to the environmental aspects. Effectively, these are organizations which produce goods and services that have social and economic objectives, the latter being one of the objectives and not the ultimate goal. In addition, companies in the social and solidarity economy are particularly rooted in the local area where they operate[4]. In general, members of these organizations (managers and workers) come from the same territory where the company operates, and thus have fostered strong social and family ties in this land. While this does not guarantee greater awareness, it gives us reason to believe that a greater consideration for environmental issues is more likely. Contrary to the private sector, where companies tend to socialize their environmental costs, SSE companies are, for the reasons mentioned above, attentive to environmental impact as well as in socializing the benefits of their business activity. There exist a large number of cases to support and illustrate this[5].

It is not by chance that there are also many examples of cities, of differing sizes and in different locations, which have invested in promoting specific strategies to encourage SSE as an instrument used to achieve greater inclusion, with more jobs as well as better jobs, while paying attention to environmental issues.

Examples of these include cities such as Praia (Cape Verde), Seoul (Korea), Madrid, Barcelona and Bilbao (Spain), Lille (France), Montreal (Canada), Araraquara (Brazil), Rosario (Argentina) and Montevideo (Uruguay), sharing this standpoint with respect to environmental issues, despite exhibiting significant differences in size and in historical backgrounds.

If we want to open paths towards a different model of production and consumption, one that contributes to the implementation of the SDGs, we have the opportunity of doing so by drawing on the experiences of cities, such as those mentioned above, whereby we can promote greater participation and implementation of inclusive and sustainable public policies. This way, a bottom-up approach to implementation of Agenda 2030 is possible, “leaving no one behind”.

[2] ILO is founder member of the United Nations Task Force on Social and Solidarity Economy established in 2013 to promote the SSE visibility and recognition;